Decoding the Genome of Head and Neck Cancer 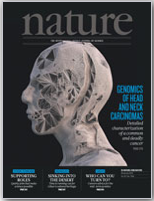 Researchers Paul Weinberger, MD, and Roni Bollag, MD, PhD, at the GRU Cancer Center of Georgia Regents University in Augusta, Georgia joined forces with the National Cancer Institute (NCI) and a team of scientists from around world to comprehensively map the genetic alterations in head and neck squamous cell carcinoma (HNSCC). Results of the project, published in PNAS on October 28, 2014 [doi: 10.1073/pnas.1416074111] and in Nature on January 29, 2015 [doi: 10.1038/nature14129] detail the genetic landscape of 279 HNSCCs and provide several new insights that may eventually lead to improved treatments for this disease. Bollag and Weinberger, both co-authors on the PNAS and Nature papers, led the GRU Cancer Center’s part of the study, which was organized by the NCI’s Cancer Genome Atlas (TCGA).

“To put this study in perspective, remember that it wasn’t until 2003 when a single normal human genome was finally sequenced – at a cost of $2.7 billion! Technology in this field has rapidly evolved; when the study was initiated the cost was around $150,000 per sample and today it costs about $3,000. That made it possible for TCGA to sequence the part of the DNA encoding the genes for all 279 HNSCC patients, and complete genomic sequencing of over twenty cancers and the corresponding patient’s normal DNA.” said Dr. Weinberger, commenting on the study. “This project required incredibly high quality tissue – we needed both tumor tissue and normal patient DNA, all collected before any chemotherapy or radiation were given, and frozen in liquid nitrogen to preserve the DNA and RNA. The infrastructure to support this kind of study is not common. I was very blessed that GRU had the forward thinking to create the GR Tumor and Tissue Bank, so that Dr. Bollag and I could be a part of such an exciting project.

Every year, approximately 55,000 Americans are diagnosed with HNSCC and around 12,000 die from the disease. While many of these patients respond well to treatment, for non-responders better treatments are desperately needed. The Nature study uncovered key genomic alterations in HNSCCs and supported the theory that HNSCCs are really two separate diseases – one caused by tobacco and alcohol, and the other caused by the human papillomavirus (HPV). The PNAS study focused on the HPV-caused subset of HNSCCs.

According to Dr. Bollag, “Several of the genomic alterations uncovered, especially in the Cyclin D1 pathway, represent potentially actionable drug targets that are not currently part of the treatment regimen for HNSCC. The groundbreaking TCGA initiative essentially paved the way for the current federal initiative for precision medicine. As precision medicine progresses, the pathologist may be involved from diagnosis to treatment. Rather than all patients getting essentially the same treatments, someday it may be possible to tailor each patient’s therapy to target the specific molecular weaknesses in that patient’s cancer.”
T
he GRU Cancer Center and the GR Tumor and Tissue Bank have been strong supporters of the TCGA project for 5 years, and have supported similar groundbreaking TCGA research projects in kidney, thyroid, and bladder cancers in addition to the HNSCC study. Dr. Weinberger is an otolaryngologist and is the principal investigator of GRU’s portion of the TCGA project. Dr. Bollag is a pathologist and is the Director of the GR Tumor and Tissue Bank; he is also a co-investigator on the GRU TCGA project.

This site uses Akismet to reduce spam. Learn how your comment data is processed.